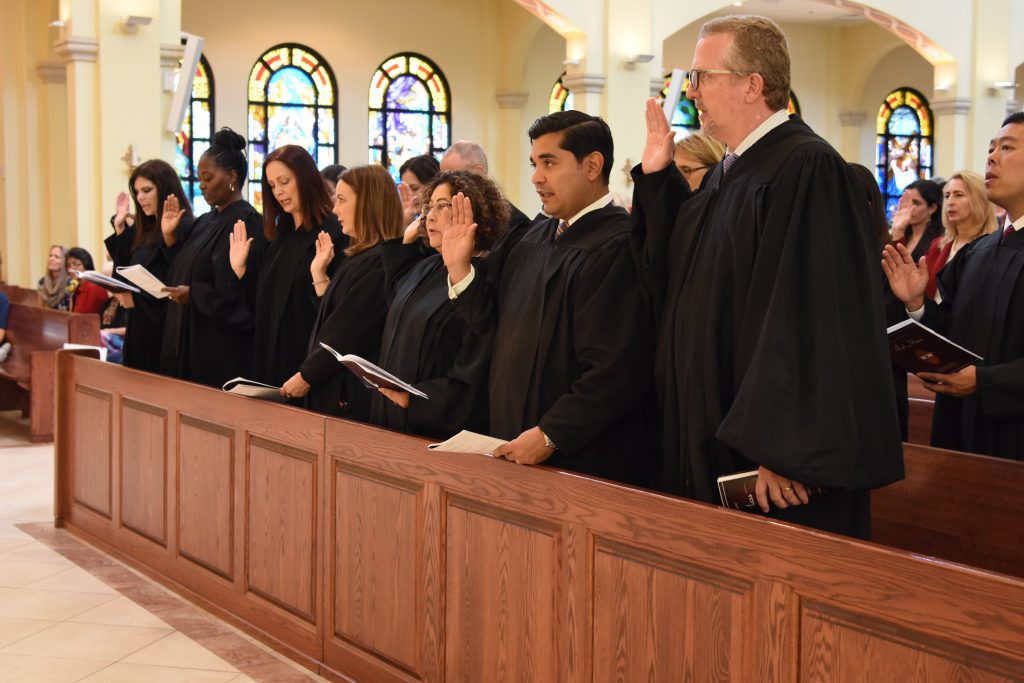 ORLANDO | St. James Cathedral in Orlando filled with judges, lawyers and other legal professionals for the annual Red Mass, Nov. 8. Celebrant Monsignor Richard Walsh called to mind recently canonized Cardinal John Henry Newman, who said in one of his meditations, “God knows me and calls me by name. He has created me to do some definite service.” Monsignor told those present, “Somewhere along the line, your decision to be what you are… wasn’t something by chance, rather the Lord inspired it in you.”  As Newman says, “He has committed some work to me he has not committed to another.”  Monsignor Walsh added, “If (the work you do) is your mission, then you are part of something bigger than yourselves… You are working for the Lord himself.”

Taking the words to heart, the lawyers present renewed their Oath of Admission to the Florida Bar then proceeded to a luncheon where the Catholic Lawyers Guild of Central Florida recognized several members of the community who live the mission God set before them.

Norma Stives, co-founder of Life Choices Medical Clinic in Altamonte Springs, accepted the St. Martin de Porres Award for strides in providing free services to pregnant mothers such as sonograms, parenting classes, professional counseling for post-abortive women and men, and much more. The clinic began as Mary’s place in 2008. Now, it is intentionally located next to an abortion clinic in the hopes of reducing the rising numbers of abortions in the state. Judge Carmine Bravo, who presented the award, noted 80% of the women who get a sonogram choose life for their child. The St. Martin de Porres Award recognizes those who, like de Porres, had an outreach to the community, who served the faithful and less fortunate.

Recalling the many mentors, supporters, guides and teachers in life who stand apart in one’s memory, having made a profound difference in charting the course of life, Kevin Shaughnessy noted, “For me and many other people in this room, Tom Wilkes (Jr.) filled all those roles. He was a mentor, teacher and he did it for me and hundreds of young Catholics, lawyers, and young professionals – all the while raising a great family and working in the Church.” Wilkes served three mayors as Orange County Attorney while working hard in the Cursillo movement and many other church ministries. Wilkes Jr. was the recipient of the St. Thomas More Award, given to a practicing Catholic who is involved in his/her parish; who displays a commitment to Catholic Social Teaching and Christian principles; evangelizes, and promotes the social, intellectual and spiritual welfare of the people served through his/her discipline.

In a moving speech, Betty Wheeler presented the new Catholic Community Servant Award, created posthumously in recognition of Deacon David Gray’s ministry to immigrants, prisoners, and the poor. Deacon Gray died earlier this year. His wife, Christeen, and one of his daughters accepted the award with gratitude. Although not a lawyer, Deacon Gray’s ministry exemplified the ideals of both St. Thomas More and St. Martin de Porres. The guild noted his laughter, love of faith, love for life, and willingness to accompany anyone in need are remembered in the hearts and minds of all who knew him.

All three recipients were clear of God’s plan for them. As St. Newman said, “I have my mission. I may never know it in this life, but I shall be told it in the next. Somehow I am necessary for His purposes. I am part in his great work. I am a link in the chain – a bond of connection between persons.”

By Glenda Meekins of the Florida Catholic  November 13, 2019