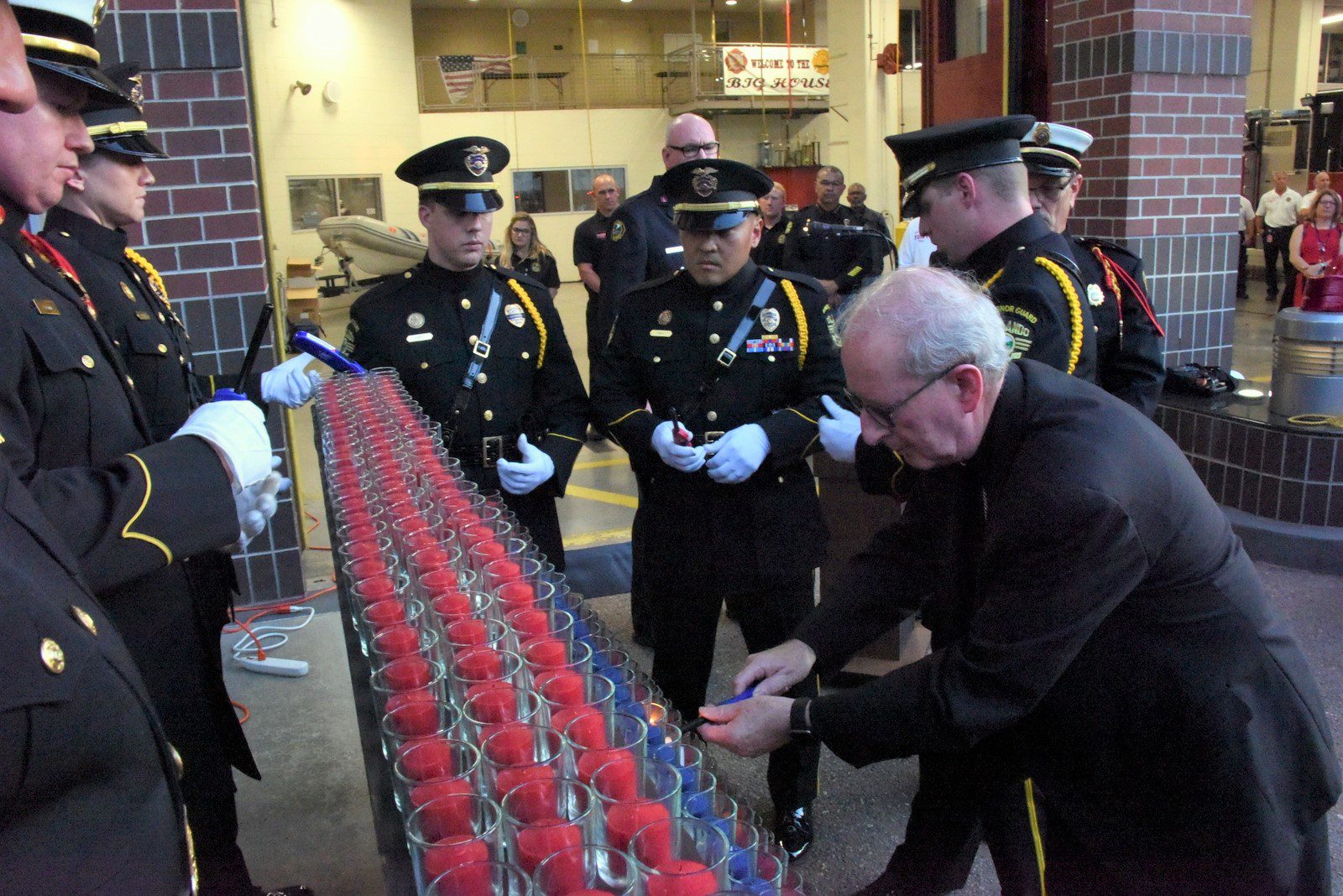 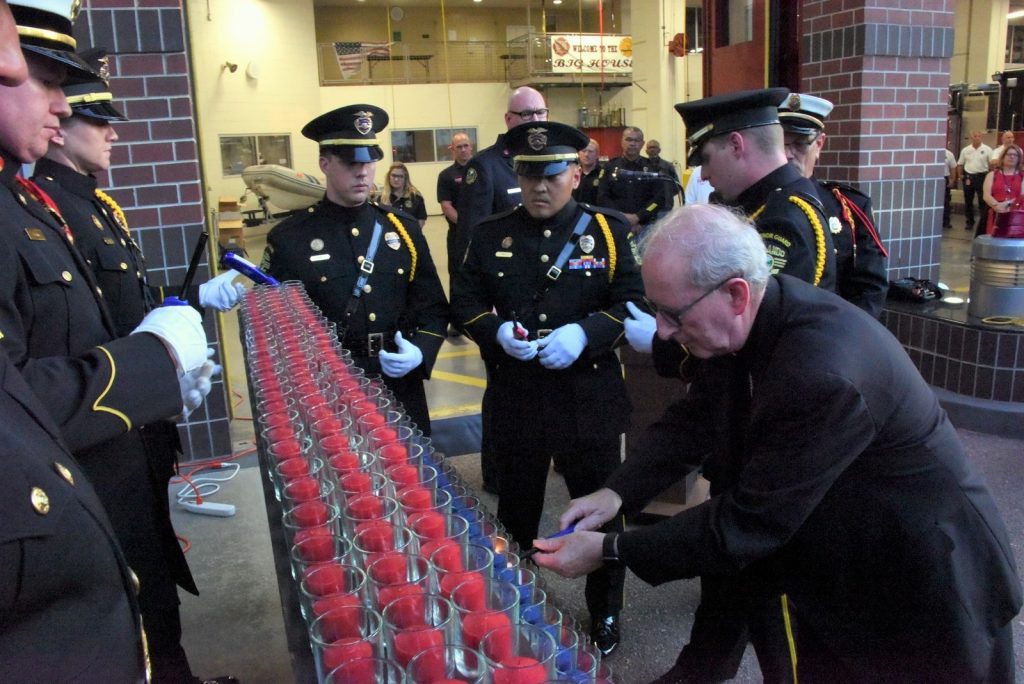 ORLANDO | As the sun set on Fire Station One on September 11, 2019, leaders of the Diocese of Orlando gathered with city officials to pray and remember. Bishop John Noonan and Father Miguel González, Rector of St. James Cathedral, sat in the front row with Mayor Buddy Dyer and others. The sound of bagpipes filled the air, as the group called to mind the victims from 18 years ago, including a Franciscan priest who was among the first to die.

Father Mychal Judge, chaplain to the New York City Fire Department (FDNY), ran from his friary to World Trade Center shortly after the first plane hit. After anointing a firefighter, he was struck by falling debris and killed.

“I am proud that we are united here tonight to honor the lives taken,” said Mayor Dyer. Directly in front of the mayor and the crowd sat a table. On that table next to a cross and a helmet, was a smiling photo of Father Judge in full firefighter gear. Bishop Noonan was called up to light a single white candle that stood above a sea of red and blue ones. It burned in honor of Father Judge.

Honor Guards from both the Orlando Police and Fire Departments lit the remaining blue and red candles, representing the fallen firefighters, police and Port Authority officers lost that day.
“Amid the urban noise of the street, we gathered for a holy ceremony honoring the beloved public safety personnel who spared their lives for us on September 11, eighteen years ago,” said Bishop Noonan. “The dignity of the Honor Guards’ lighting of a candle for each man and woman recalled his/her valor which will never be forgotten. It was a truly a blessing to participate.”

District Chief Michael Stallings helped to organize the solemn event. “This year, as we do every year, Orlando Fire Department memorializes FDNY members during our September 11th ceremony,” he said. “This year, we chose to honor Father Mychal Judge, FDNY chaplain and Catholic priest, who was killed while offering spiritual support to the crews who were heading up the stairs of the World Trade Center. We felt that by having Bishop Noonan present to light Father Judge’s candle and having the clergy and staff from St. James Cathedral present at our ceremony, it would be a more meaningful event.”

Father Judge is remembered as a very traditional and devout Catholic who had a special devotion to Mary and the Blessed Sacrament. During his funeral Mass, a friend and fellow priest said he believed Father Judge was one of the first to die because his goal in life was to prepare firefighters to meet their maker. Father Judge could not have ministered to them all on that day. He believes God took Father Judge first to meet those men and women on the other side of their journey to eternal life.
In his homily, preached the day before he died, Father Judge reminded the firefighters, “Never a boring day on this job. You do what God has called you to do… You get on the rig and you go out and you do the job – which is a mystery. And a surprise… No matter how big the call. No matter how small. You have no idea what God is calling you to, but He needs you. He needs me. He needs all of us.” Many people now refer to Father Judge as the ‘saint of 9/11.’

“We were truly honored by having the Diocese of Orlando with us during this very important night,” added Stallings. “The invitation is always open for all people to join us during our annual memorial as it allows us to grieve, and be thankful together as Americans.”

Special to Jennifer Drow of the Florida Catholic September 18, 2019